Lady big game hunters get bashed. But why?!

Ask 100 people to describe what a hunter looks like, and you’ll probably get 100 different answers. But odds are that NONE of these descriptions will include many feminine qualities, let alone actually be female.

Regardless of preconceived notions, however, many women hunt. And many hunt 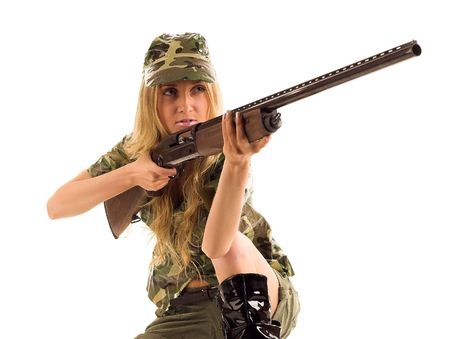 That brings us to this: In recent weeks, photos of Texas cheerleader Kendall Jones and model Axelle Despiegelaere (the pretty World Cup fan-turned-overnight media darling) have been shamed for posting photos of a successful big-game hunt in Africa. See pics here.

While the debate over the morality of hunting is nothing new, this trend of bashing female hunters more harshly than male hunters has become a major problem. Thankfully, the New York Post has taken a stand against this blatant sexism in an article titled “The ignorant, sexist attacks on female hunters.”

In said article, the New York Post gives a few reasons why people shouldn’t be so quick to judge:

1) Big game hunting is perfectly legal! And guess what? They both had ALL the documents and licenses.

3) African hunting actually helps conservation. According to National Geographic, “hunting is of key importance to conservation in Africa by creating [financial] incentives to promote and retain wildlife as a land use over vast areas.”

This article doesn’t stop there. It goes on to explain the main reason behind this recent outrage. According to Vanderbilt professor Kelly Oliver, a scholar who’s spent years on the topic of female hunting, “we still have issues with women and girls carrying guns and using them.” Oliver explains that because it contradicts our perceptions of women as meek nurturers and caretakers, our male-centric society is quicker to stereotype our hunting women as something abnormal.

Ok, guys, enough is enough. It’s fine if hunting isn’t for you, but don’t bash these ladies for doing something that is perfectly legal and, according to some experts, necessary. And if you still feel the need to condemn these hunters, that’s also fine, but just stop judging them more harshly because of their gender. That, ladies and gentlemen, is just plain sexist.