Lightning comes quick and can be deadly 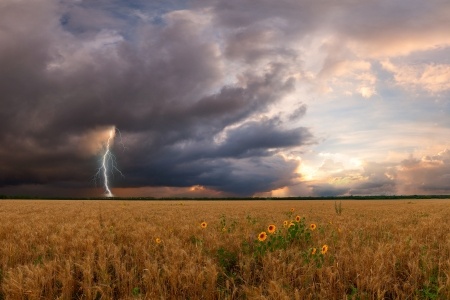 You’re a hunter, which means you know all about weather-related risks, right? We spend a lot of time outdoors  searching for game and we should be alert to those things. If we aren’t, a serious injury could happen. One thing to be especially cognizant of is the potential for lightning.

Some hunters might scoff and think this sort of warning sort of goes without saying. Logically, you’d be right to think that. But in reality, far too many hunters fail to heed such warnings.Don’t believe it? Well, here’s proof: these young Texans were struck unexpectedly in a tree stand, and these unlucky hunters weren’t in a tree stand, but nevertheless, they were also struck.

It doesn’t take but a quick Google search to find many examples of things like this happening. Deer aren’t even safe! Evidenced by this story of a herd of seven deer being struck by lightning while grazing in a field.

The best thing to do is check the weather and stay indoors if you think there’s a good chance of a thunderstorm to occur. If you’re stubborn and still have to head outside, here’s some advice for being safe in the field.

Know if a bolt is coming.

“Most lightning strikes occur at the beginning and end of afternoon storms…. Darkening skies, the buildup of anvil-shaped cumulonimbus clouds, and a sudden drop in temperature and an increase in wind often presage the storms that are most likely to produce lightning.”  Read more here.

How to prepare for a bolt.

“Because the positive charge in the ground seeks the shortest route to the negative charge of the cloud, lightning is most likely to strike the highest objects. Getting down from the ridge-line or off the water if you’re boating is the most important safety measure you can take to avoid a strike… immediately discard metal and graphite objects such as backpacks and fishing rods, which conduct electricity.” Read more here.

If you’re going to be outside when the weather is stormy, make sure you’re taking the proper safety precautions to protect yourself and your hunting partners. Getting that “once in a lifetime” kill isn’t worth risking your life over.