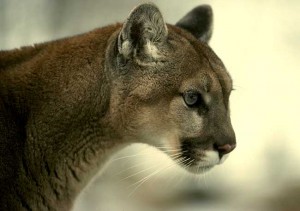 The cougar, puma, panther, mountain lion or catamount – as the species is variably called – occupies most of the Western Hemisphere. Its habitat includes mountains, deserts, rain forests and suburban environments.

This carnivore is probably the most dangerous member of the cat family that most people will ever encounter.

Most state fish and game agencies offer information on how to avoid – and how to survive – a hostile encounter with cougars or mountain lions. As you can imagine, the advice is virtually the same from state to state.

To prevent an encounter, state agencies advise against hiking alone, especially in the early morning or late evening, when cougars are actively hunting. While hiking with children, keep them together and near adults. Make noise to avoid surprising a cougar. And don’t walk up to a dead animal that could be a cougar-kill, left for the next feeding.

If you happen to surprise a mountain lion, don’t approach it. And more importantly, make sure it has an avenue of escape.

That being said, if you come face-to-face with a cat and it doesn’t move away, you’ve got some work to do to stay safe. First of all, pick up any small children. Then, take a stand. You can either maintain your ground or back away very slowly. But make sure to speak loudly and authoritatively. Keep your posture erect and wave your arms. The point is to appear as large and menacing as possible.

What you should never do is run. Never turn your back. Never take your eyes off the animal. All of these precautions will discourage a surprise attack that cougars live by.

If the cougar mounts an attack, fight back aggressively! Be the lion! Use whatever weapon you may have, or take advantage of anything that could be used as a weapon. That might include a fishing pole, a stick, a rock, a daypack or your fists. Stay on your feet, if possible. When the lion recognizes that its own life could be threatened, it will most likely break off an attack. Many hostile encounters have been defeated by a vigorous defense.

Hopefully you won’t have to worry about a face-to-face cougar encounter. But if you do, you’ll be prepared.