Where have all the pheasants gone? 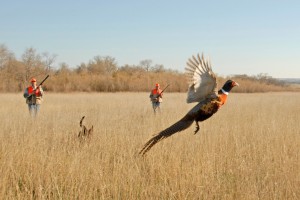 It’s difficult to find a state fish and game website that doesn’t report a decline in its pheasant population with the prediction that a reversal in the downward trend will be difficult to accomplish.

What’s to blame? A shrinking habitat. Habitat consists of food, water, shelter and space. If one or more elements are missing, an animal species cannot thrive, or even survive. Take a look at the elements of pheasant habitat that continue to decline across the continental United States.

Pheasants prefer farmland, which is constantly being fragmented and subdivided. Within an agricultural setting, a pheasant needs cover for hiding, nesting and brood-rearing. In the past, this has included brushy hedge rows, weedy field corners and grass-choked fence lines.  Now, clean farming techniques have eliminated much of that. Center pivot irrigation systems have eliminated weedy ditch banks and standing water. Regular mowing of alfalfa continues to destroy nests, broods and hens.

Pheasants feed primarily on grains, as well as nuts, berries, fruit and insects.  With the exception of the grain belt in the Midwest, fewer farms grow grain crops as was once the case. Farm after farm is being sold to developers, who drain wetlands and pipe waste water. Alternate land uses continue to fragment pheasant habitat.

If habitat degradation and fragmentation isn’t enough, add predators to the mix. These include raccoons, skunks, foxes, coyotes, feral cats and birds of prey. When hunters harvest roosters, they do very little to impact the ability of a population to reproduce and maintain itself. That‘s not true with animal predators that indiscriminately take eggs, young and females – all of which undermine the ability of a population to remain stable.

Based on developing trends, it appears that pheasants will thrive only on private game preserves and state-run wildlife management areas. Birds will continue to reproduce on farms, but at a much lower level than was the case in the 1950s and ‘60s. For the general public, the best hunting will most likely be from pen-raised birds stocked by state fish and game departments during established hunting seasons.